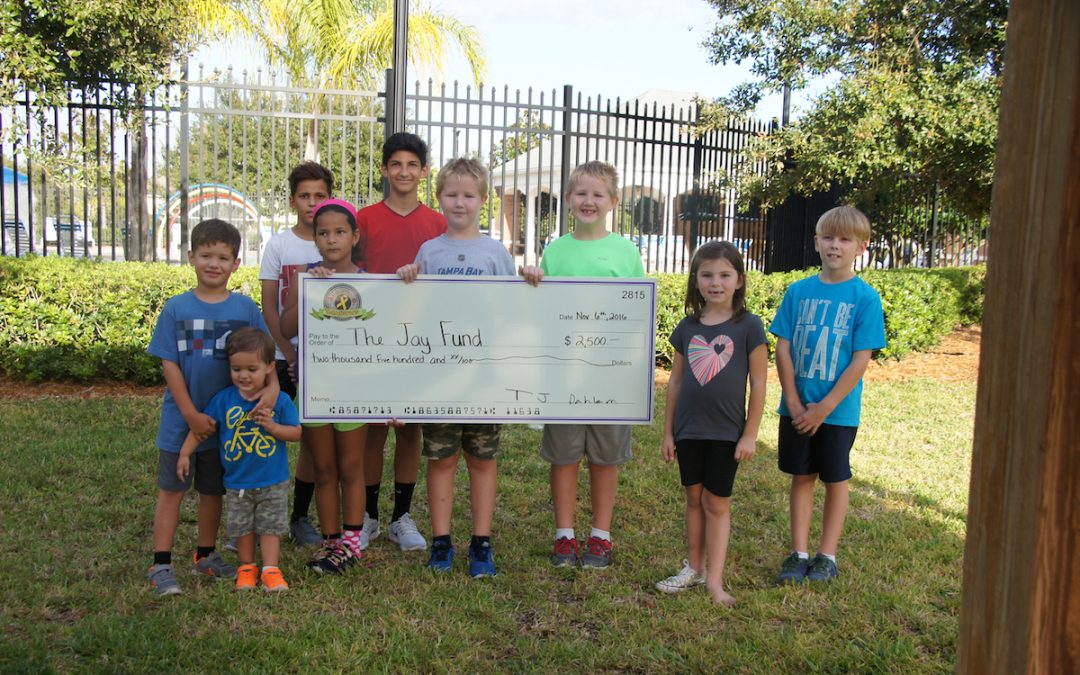 How a Boosterthon Student Raised $2,500 to Fight Childhood Cancer

Over the past year, our team has had a blast teaching students how to make a difference in their communities through our latest character theme, Backyard Box Office. And we’ve been blown away by students who’ve put our character lessons into action.

But one student in particular stands out from the rest. His name is T.J. Dahlem.

Like many of his classmates, 7-year-old T.J. has run in the Boosterthon Fun Run at Palencia Elementary School (St. Augustine, FL) three years in a row. But this year was different. Inspired by Backyard Box Office and Boosterthon’s successful fundraising program, he came home with a crazy idea.

T.J. told his mom he wanted to host a Fun Run just like the Boosterthon in order to raise money for childhood cancer.

"I really want to give money to kids who are in the hospital. I remembered there is a sickness called cancer and that's what I wanted to help," T.J. said.

Kelly Harkleroad, T.J.’s mom, was floored when she heard the idea.

“It warmed my heart to see T.J. so eager to help other children and willing to tackle such a big project at his age,” she said.

Of course, Kelly was a bit overwhelmed at first, since T.J wanted to design it exactly like the Boosterthon. According to her, he would come home every day eager to plan and discuss what needed to be completed.

Eventually, they agreed on hosting a Virtual Fun Run. T.J. and Kelly have a large amount of family spread across the U.S., so they wanted to ensure everyone had an opportunity participate. 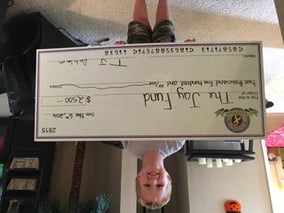 In a Virtual Fun Run, participants register online and pledge to complete a 5K during a given month anywhere in the world. Runners are encouraged to post pictures on their Facebook page once they finish. At the end of the month, all participants receive a t-shirt and a race medal.

After several months of planning and organizing, T.J. recruited 62 people from eight different states to participate in his Virtual Fun Run.

“The opportunity for him to donate that money was priceless,” said Kelly.

“I was blown away that a second-grader had organized a Virtual Fun Run! I loved that he had a purpose to help others. This is what we try to instill in our students, and T.J. was a great example of putting this idea of helping others into action,” he said.

In recognition for his efforts, T.J. received the Positively Jax Award from the local news station (WJXT/Channel 4) for making a positive impact on his community.

Kelly spoke about what T.J.’s project meant to her as a parent:

“Watching my 7-year-old son put forth so much effort to help others was inspiring. His eagerness to tackle such a large project with confidence and determination shows how the efforts of both Palencia Elementary and Boosterthon can shape the future of our world. I could not be more proud.”

When asked if T.J.’s Fun Run had any impact on the way she thinks about Boosterthon and our character program, Kelly said this:

“While we have always supported Boosterthon, this experience has really helped me to appreciate the vast impact this type of program can have on children and our future. We typically see fundraisers just as a way to support the school and community. Now I see Boosterthon as so much more.”

“The character program that Boosterthon adds has always been my favorite part of the program. I was sold on the Change the World (CTW) philosophy that Boosterthon has maintained throughout the years. I think this had an impact on T.J. and his desire to help others. Also, I firmly believe that Boosterthon showed T.J. how to raise funds for a good cause without going door to door.”

For next year’s Virtual Fun Run, T.J. hopes to raise over $5,000 and get at least one international participant. Armed with the character lessons he learned in Backyard Box Office and his incredible spirit, we have no doubt he’ll do it!

To read and watch the full news story about T.J.’s project, click here.