The 35th Lap: How a Boosterthon Student Finally Smiled

Every teacher looks for that one thing that will help a struggling student breakthrough, whether it’s academically, socially, or personally. When a math lesson finally clicks, when reading is no longer a struggle, or even when they smile for the first time in months, maybe years.

For this student, it was the sense of accomplishment that helped him breakthrough—completing all 35 laps at the Boosterthon Fun Run—of doing something difficult and finishing it. Who knew?

It’s been a tough year for one first grader at South Jackson Elementary in Athens, GA. Ann Jackson has been teaching for twelve years and has never met a student quite like him. It’s February and she has never seen him smile all year. Not even once. Mrs. Jackson teaches an inclusion class, where special needs students learn in homeroom classrooms. This particular student sometimes is in her first grade classroom and sometimes moves down to kindergarten, depending on how he’s doing academically. And though he changes grades to best suit his needs, the one thing that never changes is his expression. 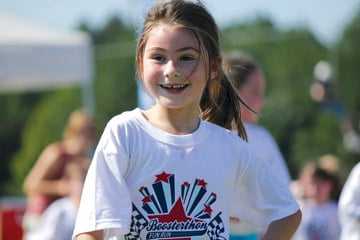 “He just never smiles,” Mrs. Jackson said. “His face is flat. I don’t know how else to describe it. It looks like he just lost his best friend.” Mrs. Jackson said that he doesn’t get excited about anything. The only thing he has any interest in is video games, even still, not excited enough to crack a smile about them.

The day of the Boosterthon Fun Run event came at South Jackson, and with all of the people on the school field, he was a bit overwhelmed at first. But when the music started and everyone started running, he joined in. Mrs. Jackson cheered him on the entire run, counting every lap that was marked on the back of his Boosterthon jersey. “You’re on lap 10. Only 25 more to go!” Every time around, Mrs. Jackson let him know how many he had left until he reached the lap cap at 35. “20! Only 15 more to go!” And with just enough time left in the Boosterthon Fun Run event, the final lap came around. “Last lap! You can do it!”

“When he got that final lap,” Mrs. Jackson said, “He couldn’t quit smiling. It was incredible.” He even went over to his classmates and told them what he’d done, what he’d accomplished. Maybe he doesn’t smile again for the rest of the year, maybe he does it everyday, but he did it, and there’s tremendous hope in that.

Do you have a story about your student in a “breakthrough” moment? Tell us on Facebook. They could be on our blog!