Of Course We Remembered You, Alex.

Alex Martin is a 7-year-old at Schwarzkopf Elementary in Florida. Like other students, he’s been looking forward to seeing the Boosterthon team since they left campus last year after the Fun Run. He remembers holding the American flag high and proud during the National Anthem, and finishing his 30th lap.

For him, there’s nothing that can get in the way of another great year of Boosterthon…. except an unexpected visit to the hospital.

When Alex was born he was diagnosed with Pulmonary Atresia Hyperplastic on the right side of his heart (referred to as “Half Heart”). He had his first heart surgery as an infant and has had a total of two open-heart and three cauterizations, with one more surgery to come.

Despite his early health set backs, you wouldn’t know it. Like any other 7-year-old boy, you can find him playing videos games, swimming, riding his bike and roller-skating. He shines the most when he’s active and adventurous.

His parents don’t put restrictions on his physical activities, so last year’s Boosterthon Fun Run was another way Alex could succeed despite his heart condition. At the Fun Run, Alex kept a steady pace, took breaks between laps and drank a lot of water. Then, he proudly circled the Speedway for his final lap with a huge smile of success!

A brave student like Alex is hard to forget, so when the Boosterthon team arrived this year at Schwarzkopf and saw that he was absent, they learned he had been hospitalized for a week and was sad he would miss the Fun Run.

There’s no way Team Tampa was going to let him miss some Boosterthon fun. So, they decided to bring the Boosterthon program to him. Toting a goodie bag, the Boosterthon theme song and our character lessons, they visited Alex in the hospital. Alex was thrilled and told his mom he was happy his “friends” (the Boosterthon team) didn’t forget about him. 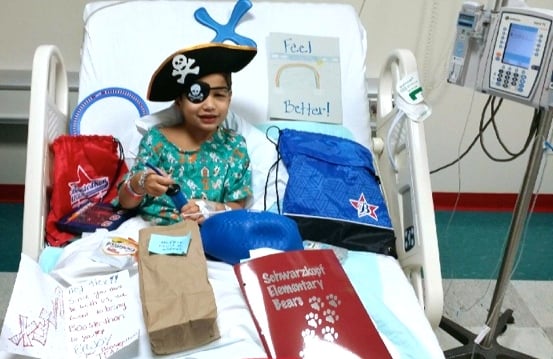 No, we didn’t forget about you, Alex, and we look forward to seeing you again next year – but hopefully out on the Speedway next time!