One of our school’s favorite things about the Boosterthon is that it’s high-energy and interactive! While most students enjoy the music at pep rallies and cheering at the Fun Run, for some students, the energy actually makes it a little harder to enjoy the experience.

At the age of 3, Lawson was diagnosed with autism and struggles with social and functional communication and sensor sensitivity that leads to frustration and anxiety when he is over stimulated. Even if he wants to participate in something (like a festival or amusement park) the music, cheering and dancing can overwhelm Lawson’s senses. And that’s what happened during Lawson’s first year as a Boosterthon student. He was so excited to participate, but had to overcome some obstacles. He was unable to participate in the Pep Rally, and though he ran a few laps at the Boosterthon Fun Run, he had to cover his ears.

His parents saw how much he wanted to be a part of the program and it was the perfect opportunity to help their son participate in the same activities as his non-disabled peers. As a family, they worked on desensitizing techniques and home therapy during the summer. Lawson excelled in therapy, and by the time the Boosterthon came back to Flowood Elementary the following year, he was ready to go!

Year two was much better than the first, and although he still covered his ears at times, he was able to attend the entire Pep Rally. He ran 18 laps at the Fun Run event, and he was even spotted dancing! His mother, Becky, says, “I understand that most people won’t see the significance in that, but for Lawson, and our family, this was a really big deal! He was so happy and proud of himself!” 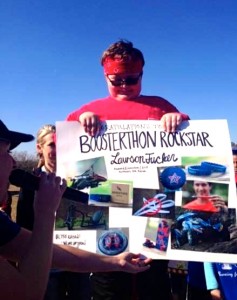 And just when you’d think Lawson has reached his limit, he exceeds everyone’s expectations. At this year’s Boosterthon Pep Rally (now year 3 as a Boosterthon student), Lawson danced like no one was watching! He sang and cheered, and didn’t cover his ears. He also raised $53 per lap in pledges and ran the entire 35 laps with a friend by his side – that’s over $1800 for his school!

The Boosterthon has been something he looks forward to ever year, and it gives him an outlet to feel proud of himself and of his accomplishments!

In giving advice to other parents of special needs children, Lawson’s parents say, “never stop encouraging your children to participate in things that would allow them to have social interaction with children of all abilities. I know that’s easier said than done, but if you can find what motivates them and provide them with constant positive reinforcement- regardless of their level of participation- then you’ve opened the door for them to build confidence and (hopefully) a desire to have more social interaction and build friendships. Social skills are probably the hardest to teach, but for a child like Lawson, they are the key to his future independence."

Lawson, we are so proud of how far you’ve come. You are an inspiration to so many people. Keep dancing!

We love hearing inspiring stories from our incredible Boosterthon students. Here are 3 more that are sure to put a smile on your face!

We are just so impressed with this 7-year-old's attitude.