Ryan Watson is your average 13-year-old. He plays baseball and runs track, is the only child to two loving parents, and can often be found in the school science lab studying his favorite subject.

But recently, Ryan’s life took a dramatic turn. He felt tired, had headaches, and began suffering from a low-grade fever. Though these were all symptoms of chronic sinus infections, which he experienced often, this time something felt different. After 9 days of constant fever, he was taken to the ER. It was there that Ryan was diagnosed with Leukemia. 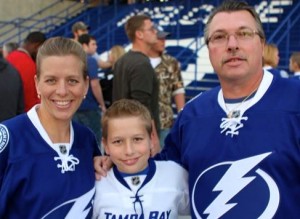 In utter shock, his parents had to try and grasp what was happening to their son. There was a flood of emotions, unanswered questions, and an unknown journey they were about to face.

Unfortunately, Ryan’s diagnosis was a few days before the Fun Run, and he wouldn’t be able to participate, but he and his family still experienced something magical.

Little did Ryan know, everyone at Challenger K8 had a little something up their sleeves—and it all happened the week of the Boosterthon.

First, students dedicated the entire Boosterthon program to Ryan and decorated signs and posters to hang throughout the school. Next, for leukemia awareness, Ryan’s classmates wore orange ribbons during the Fun Run—adding pops of orange among the red, white, and blue Speedway. And for their finale, they all gathered at the end of the Fun Run and released orange powder into a giant cloud while chanting, “Ryan Strong! Ryan Strong!”

Boosterthon Program Leader, Christine Larsen, was there to witness everything. “It was moving to see his peers and faculty come together. They showed how the community was #RyanStrong. It was a great day to celebrate the school and Ryan.”

“We were completely overwhelmed,” said Ryan’s mother. “We had heard they were going to be doing something, but we were so caught up with caring for Ryan, that we didn't think too much. I later went on Facebook and saw the video...Wow! Our hearts swelled with joy and we couldn't believe that this was all for Ryan. It was quite touching!”

With a three-and-a-half year recovery time, Ryan will fight Leukemia with ongoing tests and treatments. Though they have a big journey ahead, Ryan and his family say the love and support from the community has been amazing for their spirits. Ryan’s mom expresses, “The school and the community have been amazingly supportive, kind and giving. We are truly blessed.”

The Boosterthon team was honored to be able to support Ryan alongside his school, and watch how a community can rally around one person to lift him up.

Ryan, we look forward to hearing positive reports throughout your recovery.

We’re all behind you. #RyanStrong.

Read more inspiring stories of Boosterthon students who have faced challenges with strength and courage: