Guest Blogger: From a XXL to a Large Shirt: Boosterthon Teacher Tells How She Transformed Her Life

For the first time ever, the Boosterthon Blog is hosting a guest blogger. Jennifer Swafford is a Boosterthon teacher in Atlanta, GA, and when we heard her story about fitness and health, we knew our readers would love to hear it first hand. We hope you’re just as inspired as we are.

It is March, 2009. I am a teacher in a Cobb County School in Georgia, and we have just had Boosterthon at our school. It was a fabulous time and a miserable time all rolled up into one. 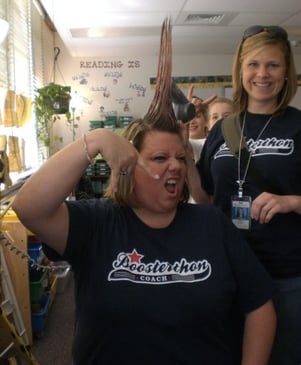 Boosterthon of that year was fabulous because my class had the highest number of pledges in the whole school. My incentive for them was that I would wear my hair in a Mohawk for the fun run. THE KIDS LOVED IT!!! I was the “cool” teacher who would do just about anything to challenge her students to set goals and achieve them!

On a different note, Boosterthon was miserable that year because I weighed over 270 pounds. When my class went running out onto the field, all I kept thinking about was my big belly jiggling, and I was trying to keep my pants from falling down. I was embarrassed to be as heavy as I was, especially at a healthy event; I was the epitome of unhealthy. I was trying to be a leader to 27 fourth graders, and I didn’t know how to lead them in having a healthy lifestyle. I was miserable, fat, and wasn’t living life to the fullest.

2009 was a turning point for me. In January, I decided to join Weight Watchers to try and lose weight. My husband and I were ready to start a family and I knew that I was in no shape to have children weighing over 270 pounds. I’d done Weight Watchers in the past and thought I would try it “one more time.” I really did not think I would be successful but I knew I had to try.

My goal for each week was to not gain weight. I didn’t care how much I lost, I just didn’t want to gain. During this process, I lost around 30 pounds and I received a postcard from my Weight Watchers leader that said, “You will be a success!” I thought, “Hmmm ... if she thinks I will, maybe I will!” That was a turning point for me. I knew I would be successful, no matter how long it took! That year, I would go each week losing one or two pounds. Weeks lead to months, which turned into a year.

By January of 2010 I’d lost 75 pounds. I had a new outlook on life and was really taking charge of my future and my health. I was down to around 210 pounds, so I started exercising. I would try to walk a few days a week. My energy level changed dramatically. Instead of coming home every day after work and taking a nap, I would go for a walk or tutor after school to make extra money. 2010 was not a big weight loss year for me. I plateaued for a few months, gained for a few months, and then got back on track. The one thing I did not falter on was going to my Weight Watchers meetings every single week. Without fail! Through the ups and downs of weight loss, I didn’t quit. I finished out the year having lost a total of 85 pounds.

Here we are, 2011. I decided it was time to share my story and help others so I started a weight loss blog. Through  my blog I can inspire others, share recipes, and give reviews on products I have tried. It also helps hold me accountable to others so I am more successful!

I have continued to lose weight using the Weight Watchers program. I have now lost a total of 92 pounds and am hoping to lose 100 pounds by the end of 2011. I am working out 6 - 7 days a week and have the goal of running a half-marathon by the end of 2012.

I can now say I am a healthy role model to the children at my school. When they see me, they see a teacher who is full of life, energy, and has a passion for living. I am passionate about living a healthy lifestyle and inspiring others to do the same.

Stay tuned to Jennifer’s next blog post on our blog. She’ll let you know how to put your new drive to stay healthy into action.

Jennifer Swafford writes about her daily weight loss journey at. It Sux To Be Fat. She graduated from Lee University in 1999 with a Bachelor's degree in Education. She received her Masters degree in Elementary Education from Kennesaw State University in 2004.