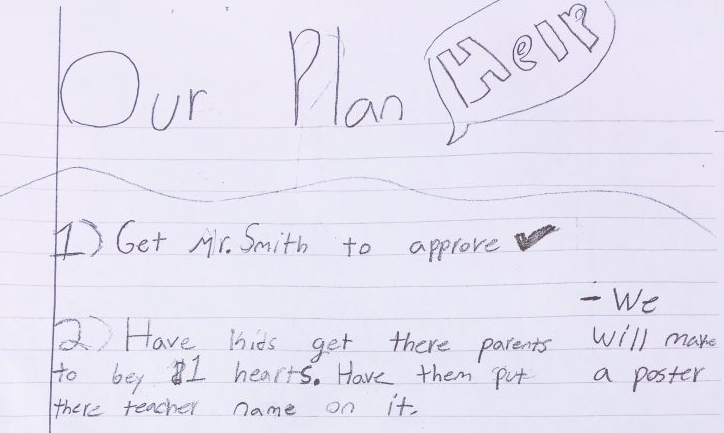 As it turns out, kids really do want to make a difference.

Take, for example, a group of four 5th-grade students at Pitts Road Elementary in Concord, NC. Recently, they found out their friend and classmate Dakota was diagnosed with cancer.

That is, until they were introduced to Boosterthon’s newest character theme, Backyard Box Office.

In case you're unfamiliar, Backyard Box Office is movie theme all about making a difference by getting into character. This amazing new theme takes students on a step-by-step journey of how to make a difference in their world, taught by REAL-LIFE kids who are already making a huge, positive impact on people’s lives.

The five "Character Acts" the students learned through Backyard Box Office were Find A Need, Write A Plan, Rally A Team, Launch It Now, and Grit It Out.

Inspired by what they learned through Backyard Box Office, this group of 5th-graders decided to make a difference for Dakota.

So they put into practice every step of Backyard Box Office.

First, they Found A Need: thousands of children—like Dakota—who are suffering from cancer.

Then, they Wrote A Plan, and it went something like this: 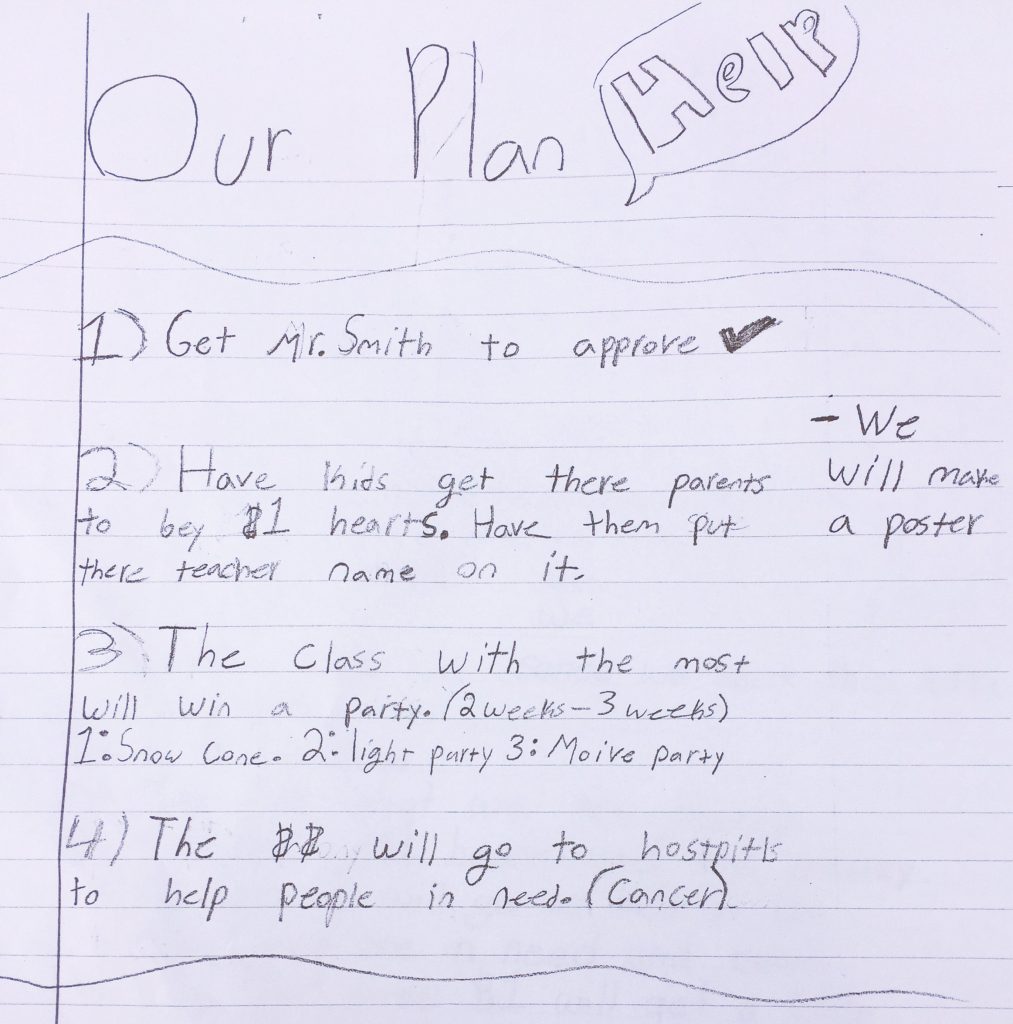 Their teacher, Mrs. Diskin, was blown away by their initiative.

"As a teacher, when this group of young ladies and gentlemen presented their idea I was quite proud of their 'take charge' attitudes. They truly saw a need, made a plan, and wanted to put it into action. It is amazing to me that in a matter of minutes this group put together an entire fundraiser for Dakota," she said.

“It is amazing to me that in a matter of minutes this group put together an entire fundraiser for Dakota.”

Dakota's teacher, Ms. Wagner, was so impressed that this group of 5th-graders, without any prompting or help from an adult, came up with such a detailed plan of action.

And the whole thing was 100% student-led.

Next, they needed to Rally a Team. The four of them were already committed, but they knew they would need to enlist the help of their principal, Mr. Smith, and the entire school.

So they Launched It Now by writing a note to Mr. Smith, explaining their creative idea to help Dakota. 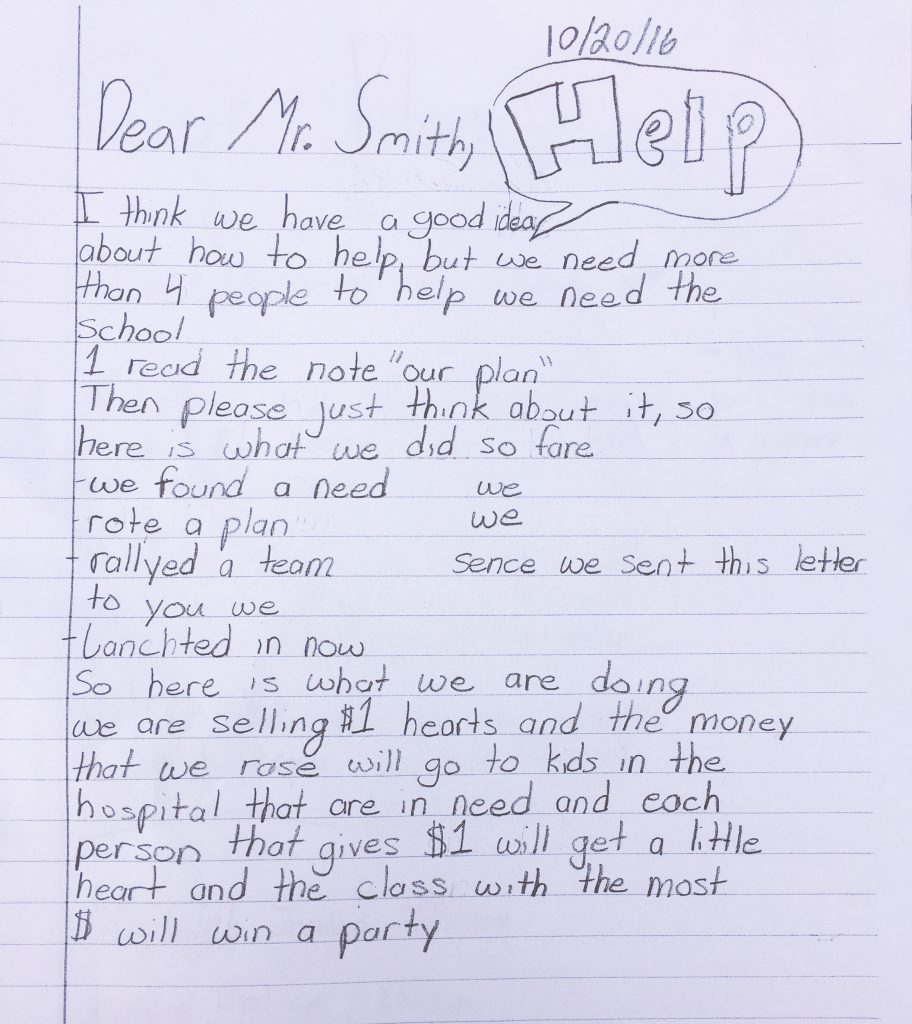 They had an idea to sell paper hearts for $1 to students at Pitts Road Elementary. It would be a competition of sorts, and the class with the most hearts would get a party. The crew would then donate all the proceeds to helping sick students like Dakota.

Principal Smith was floored when he received the note.

"I sat and listened in amazement," he said. "They were so passionate about this idea and project. I felt like my only task was to guide their understanding and support them in every possible way. It was absolutely wonderful to see them make the connection to the lessons taught through Boosterthon and apply them in their lives."

“It was absolutely wonderful to see them make the connection to the lessons taught through Boosterthon and apply them in their lives."

"It also affirmed the fact that Boosterthon is more than just a fundraising strategy. They truly help us teach and grow our students into the type of people we all desire to become."

“Boosterthon is more than just a fundraising strategy. They truly help us teach and grow our students into the type of people we all desire to become.”

The news about the students' idea spread quickly. Eventually, Dakota's mom, Ms. Roseborough, heard about it.

"I was amazed that they would be so thoughtful and want to help," she said.

According to her, Dakota was "very happy and excited" when he heard that his classmates were banding together to help him.

"It means a lot that they think so highly of Dakota to want to help," Mrs. Roseborough continued. "The fact that they took the time to stop and formulate a plan to help a need is just awesome!"

And you better believe these students are ready to Grit It Out, even if things got tough.

According to Mrs. Diskin, the students' fundraiser for Dakota is currently in its second week and will be ending soon. Throughout this time, the group of 5th-graders has come into school early each day to work on their fundraiser and man their stations.

We are so impressed by this incredible group of students and their desire to make a difference for a friend in need. And we're thrilled that they used what they learned in Backyard Box Office to make it happen.

"Seeing students support each other without adult prompting is better than any paycheck, pay raise, or anything someone could 'give' me," said Mrs. Wagner about her students.

"Their actions mean so much more because it was authentic and student-led. Any of the teachers/staff could have put the same plan into action, but seeing Dakota’s classmates take this responsibility is so much more powerful. I’ve had chills each time I think about their impact. This is something I’ll remember forever!"

“I’ve had chills each time I think about their impact. This is something I’ll remember forever!”