Celebrating National Hispanic Heritage Month By Celebrating One Of Our Own

September 15th begins National Hispanic Heritage Month, and we wanted to highlight one of our most talented Boosterthon team members who most friends of the Boosterthon have never met. But he makes a big impact on the way students experience our program.

You’ll learn a little about his life, his work, his family, and how he came to join the Boosterthon family all the way from Central America. 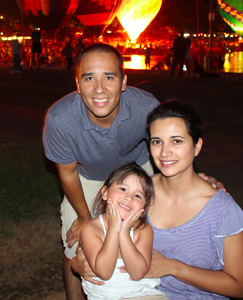 JC Peña is the Lead Media Developer at Boosterthon and was born in Guatemala City, Guatemala. He attended a bilingual school growing up that spoke Spanish but also taught English. English came faster to JC than his classmates because his grandfather is American. JC remembers his grandfather speaking to him in English as they traveled throughout the U.S on long road trips (one spanning the entire country—from Florida to California—a three-month trip!).

Always interested in movie special effects growing up, JC developed a talent in graphic arts. JC was accepted into the arts department at Universidad Rafael Landivar where he earned a bachelor’s degree in graphic design. After college, he married Kathy, a high school classmate. They now have a daughter, Elizabeth, who’s three years old. (And from what you can see from the picture, yes, she is one of the most adorable girls on the planet.

One of JC’s claim to fame is his family, but his other claim to fame is his work in a blockbuster movie. Ever heard of The Chronicles of Narnia? JC was part of a graphics team that worked on different scenes in The Lion the Witch and the Wardrobe. If you’ve seen the movie, JC worked on the last battle scene, the phoenix, and the scene of the Pevensie children being swept down river by a melting, frozen waterfall.

JC now serves on the Boosterthon creative team, helping to produce all of the amazing videos that serve our partner schools so well. Needless to say, JC is an incredibly talented guy who we are proud to have on our team! And his heritage has helped shape who we are as a company.