In just a few days, the 2012 London Summer Olympic Games will kickoff and around 530 U.S. athletes will compete to be the best in the world at their sport.

Just a handful of our athletes are widely known around country, so we’d like to introduce you to one of these Olympic athletes who will make watching these games hit a little closer to home—her mother is a part of the Boosterthon family.

Dana Vollmer is swimming for Team USA in London, and her mother Cathy is a second grade teacher at Acton Elementary in Granbury, TX.

Since Dana was four-years-old, Cathy encouraged her daughter to participate in an array of sports, and though Dana was extraordinary at each, one finally took the lead, launching her onto a professional track at age 12.

"She was good at all the sports she tried, but I wanted swimming to be her choice," said Cathy.

It’s fitting that Dana chose swimming because her mother was a swim coach at the local YMCA, and has served as both mom and coach since her daughter first hit the pool at a young age. But swimming only became Dana’s primary sport after she tore her ACL playing basketball in high school. Though at age 12 she’d been the youngest person to ever try out for the Olympic swim team, Dana deliberated which sport to pursue in college, and then possibly as a career. Her ACL injury was a major factor in her decision, but even after choosing swimming as her main sport, Dana wasn’t finished facing setbacks.

When she was 15, Dana was diagnosed with supra ventricular tachycardia, a heart condition that can spark an irregular heart rate up to 240 beats per minute, or suddenly stop the heart. Even after surgery, every time Dana got in the pool, Cathy was waiting poolside with a defibrillator just in case. Swimming was a gamble.

And despite other injuries and countless rehabilitation sessions throughout her career, Dana earned several prestigious 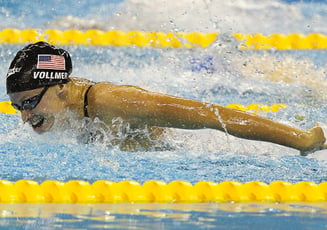 Dana’s perseverance in athletics, her ability to choose to stay focused and continue swimming finds a great parallel to next year’s Boosterthon character theme about choices—one of our “Highway Heroes,” the 1930s Olympic runner, Glenn Cunningham. Cunningham has an incredible story about how choosing fitness despite setbacks makes a person stronger.

The 2012 London Olympics will actually be Dana’s second Olympic games. At age 16, she won gold in the 2004 Athens games, setting a world record with the U.S. 800m freestyle relay team. Though she missed making the 2008 Beijing games, a time where she considered leaving the sport, Cathy said that Dana found renewed strength in a trip to Fiji where she participated in a fun open water swim race and taught local children how to swim.

"It was important to us as parents to see our child follow through,” said Cathy, “and see her overcome her fears."

Now four years later, Dana is stronger than ever and ready to represent America in London’s Olympics.

Help cheer on Dana Vollmer and the U.S. Swim Team during her three Olympic events!