The three main aspects of our program are fitness, leadership, and character. We’ve been able to highlight on our blog schools that integrated fitness and leadership into their daily school rhythms, and now we get the opportunity to celebrate a Boosterthon school for their achievement in infusing character into their school culture.

Kimmie Etheredge has been the principal of Granger Elementary in Keller, TX for five of her ten years as an administrator. Along with one other Texas principal, Kimmie was asked to attend a Character Education Partnership (CEP) conference in Chicago, IL to learn how to show other Texas principals how to integrate character education in their schools. After the conference, her passion for character ignited, and Granger Elementary focused its mission on “building responsible citizens” by making character a part of each day.

If you walked the halls of Granger today, you’d stroll down Citizenship Lane and Fairness Boulevard, with the walls covered in character education word art and quotes. You’d hear teachers incorporating character into their lesson plans and pausing in the middle of stories to discuss moments of good and bad decisions. It’s on the students’ agendas and the morning announcements. Character is everywhere.

All of this attention to character education has earned Granger, and one other Texas school, the 2012 Texas School of Character Award given by the CEP. Granger met close to 40 principles on the CEP rubric and are now in contention for a national award as they go up against schools from across the nation.

We were honored to hear that Kimmie included Boosterthon in her application to win the CEP Texas School award.

“When we submitted the application, Boosterthon was a part of it. We needed to provide specific artifacts to prove we met each principle, and we attached pictures of our students with the Boosterthon Team. It showed that we take character education seriously, even down to our fundraising choice.” 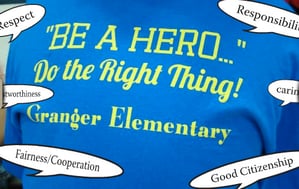 “Boosterthon is a continuation of what we’re already doing,” Kimmie said. “The students love the classroom character presentations so much. They’ll say to me, ‘the Boosterthon team said this today and that’s what you’ve been telling us!’”

Kimmie said that Granger’s next step to teaching and promoting character education better is receiving feedback from the CEP, polling parents and teachers, and focusing on next school year.

“We want to be a national school of character,” Kimmie said. We don’t doubt that they’ll get there.

Congratulations to Granger Elementary for their incredible accomplishment and to all of our incredible schools who are focusing on growing students of character.